The best fluorophores for PALM imaging

Photoactivated Localization Microscopy, or PALM imaging, is a super-resolution technique that relies on the random activation of fluorophores to spatially resolve molecular details (Betzig et al. 2006). In brief, upon activation with the adequate laser, a sparse number of fluorophores emit for a short period before bleaching. Because fluorophores are only activated at the same time in small numbers until all have emitted, it is possible to localize and track single molecules over time.

Similarly to any single molecule localization microscopy (SMLM) techniques, the key in PALM imaging is to use the right fluorophores. PALM microscopy is particularly recommended for live-cell imaging, counting and tracking of molecules in cells or in solution, as most fluorophores are normally only activated once – except those with photoswitchable properties (see below). On the contrary, dSTORM microscopy, where phototoxic buffers and high-power lasers are applied to induce fluorescent dyes to go through several on and off states before bleaching, is mostly suitable for fixed samples. In this post, we summarize some of the different photoactivatable, photoconvertible or photoswitchable fluorophores that can be used for PALM imaging in live cells, considering your experimental requirements and protein cellular localization.

These emit light upon activation, most commonly with UV irradiation, and are the most commonly used fluorophores in PALM imaging. They are photoactivatable versions of commonly used fluorescent proteins (FPs), which can be fused to the protein of interest. In general, it is important to keep in mind that photoactivatable fluorophores are dark by nature and imaging can be tricky at first (the cells will be dark too!), requiring some optimization. 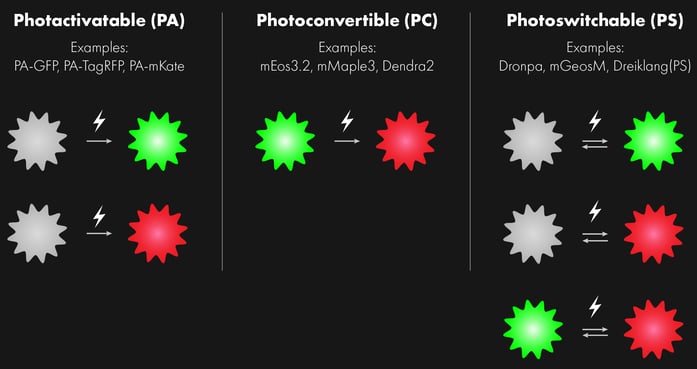 These are fluorescent proteins that already emit fluorescence in their non-converted state and that change their emission spectrum upon activation, most commonly with UV light. The conversion is irreversible. They offer accurate localization thanks to high photon outputs. Some of the widely used PC fluorophores, most from green to red, are:

Contrary to photoactivatable fluorophores, photoswitchable fluorophores are reversible and able to shuttle between a non-fluorescent and a fluorescent state, cycles can be repeated several hundred times without photo-bleaching. They tend to be bright and, therefore, give high localization precision. However, if you are aiming at study the dynamics of individually labeled proteins over time in live PALM imaging, it will be better to use photoactivatable or photoconvertible fluorescent proteins, which will only emit once. 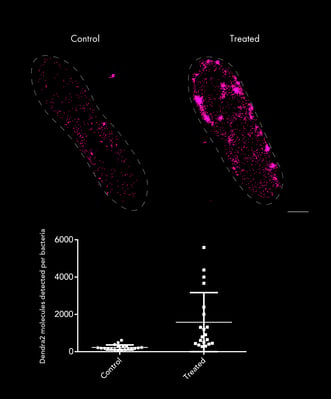 PALM imaging of Escherichia coli bacteria control (left) or treated with antibiotic (right), in which the number of molecules of Transcription Factor-Dendra2 fusion proteins were quantified for each condition. Sample provided by Prof. Michael Schlierf's lab at the B CUBE - Center for Molecular Bioengineering TU Dresden.

An alternative labeling approach that has gained adepts in recent years is the use of hybrid systems; a combination of genetically-encoded protein tags with a separate cell-permeable synthetic fluorescent ligand. These include proteins tagged with SNAP tag, CLIP tag and the most used HaloTag® – a system that uses a range of fluorescence ligands, such as tetramethylrhodamine (TMR) and Janelia Fluor® 549 or 646 (Grimm et al. 2016). These tags combine the advantages of genetically encoded fluorescent proteins with the superior brightness of synthetic dyes and photostability (less prone to photobleaching than FPs), but require a laborious labeling process (Los et al. 2008). If optimized, these systems allow researchers to carry out high-speed and dual-color single-molecule tracking in live cells (Banaz et al. 2018).

It is not only genetically-encoded fluorescent proteins can be used for PALM imaging. Synthetic dyes or quantum dots conjugated to antibodies can also be used. However, these are only suitable for fixed samples, not appropriate for live-cell imaging and specific targeting of the protein of interest can be more challenging. For their use, cells have to be permeabilized to ensure access through the plasma membrane and into the cell interior, and fluorescence intensity levels can vary depending on the concentration of labeled secondary antibody or fluorescent dye.

For further literature insights, read a recent comprehensive review on photosensitive fluorophores for single-molecule localization microscopy (SMLM). You can also read more about the basics of PALM microscopy or single-particle tracking.

You can also download a summary guide to the most popular fluorophores for PALM imaging based on this blog post. Happy imaging!