When preparing a sample for STORM microscopy, one of the most important factors to consider is the choice of fluorophore. The ability to accurately localize single molecules is dependent on the use of fluorescent molecules that stochastically switch between a fluorescent “on” state and a dark “off” state – a photophysical behavior that is often referred to as blinking.

It is also crucial to select an appropriate buffer solution,which will efficiently regulate blinking behavior and help achieve high quality super-resolution images. Here is a brief guide to STORM buffer components and how they can affect sample imaging.

Although STORM buffer solutions can vary greatly in their complexity and differentially affect distinct classes of fluorophores, they typically consist of various chemicals and enzymatic systems that regulate the photophysical properties of fluorophores. Investing time into carefully choosing the optimal buffer conditions is a key consideration for enhancing image quality. The use of inadequate imaging buffers can debilitate the end-result of the experiment, compromising the quality and resolution of the image through sub-optimal blinking behavior of fluorophores.

When a fluorescent molecule absorbs light of a particular wavelength, electrons are excited from a ground state to an excited singlet state. Relaxation of the excited orbital electron back to the ground state results in the emission of a fluorescent signal and is the basis of fluorescence microscopy. When an electron is excited to a higher energy singlet state, there is a low probability of intersystem crossing to the triplet state. The triplet state is a relatively long-lived dark (or “off”) state in which the radiative decay of the electron back to the singlet ground state will occur by phosphorescence.

Fluorescent molecules can also enter a dark state through radical anion states generated by electron transfer reactions mediated by reducing agents (Vogelsang et al, 2009). Utilizing reducing agents in STORM buffer has been shown to extend the time period in which the fluorophore exists in the dark “off” state. Maintaining the radical anion state, however, can be challenging and requires the elimination of all potential oxidants, including oxygen (Vogelsang et al, 2009). Commonly used reducing agents in STORM buffers include thiol-containing compounds such as MEA, BME, DTT and L-Gluthathione.

Molecular oxygen is a critical player in fluorophore stability as it possesses the ability to quench fluorophore triplet states and form undesired higher energy singlet oxygen species, which are highly reactive and can induce irreversible photobleaching (Renn et al, 2006).

A drastic reduction of molecular oxygen concentrations when acquiring STORM images not only enhances photostability, but also extends the time in which a fluorophore exists in the dark state (Aitken et al, 2008). Classically, STORM buffers consist of a glucose oxidase and catalase enzymatic system or are based on protocatechuic acid (PCA) and protocatechuic dioxygenase (PCD).

The accuracy with which single-molecules can be localized depends on the signal-to-noise ratio of the emitted fluorescence signal. Therefore, any chemical component that increases the number of photons emitted by fluorophores in the “on” state, without hindering the blinking process, can be a useful addition to the STORM buffer to help improve resolution.

For applications outside STORM microscopy, the blinking behavior of fluorophores can often be undesirable e.g. in FRET experiments. A solution to this issue has been found by using buffer solutions with a combination of oxidizing and reducing agents in the absence of oxygen (Vogelsang et al, 2008). In this way, any radical anion that is generated through reducing reactions while in the triplet state will be quickly oxidized back to the singlet ground state.

Conversely, if the fluorophore is oxidized while in the triple state, it will be returned to the singlet ground state through a reducing reaction. By adapting the components of the imaging buffer solution, it is possible to regulate fluorophore blinking behavior to suit your specific imaging needs.

At ONI, we are constantly working towards improving buffers supporting both blinking and non-blinking states. We’re passionate about STORM microscopy and seeing people get the most out of their research.  If you would like to make use of ONI’s experience in this area or want to know more about our own buffers, please get in touch. Read more about the basics of STORM microscopy and how STORM can be used in quantitative cellular imaging, an article which includes a case study on analyzing mitochondria in neuroblastoma cells. 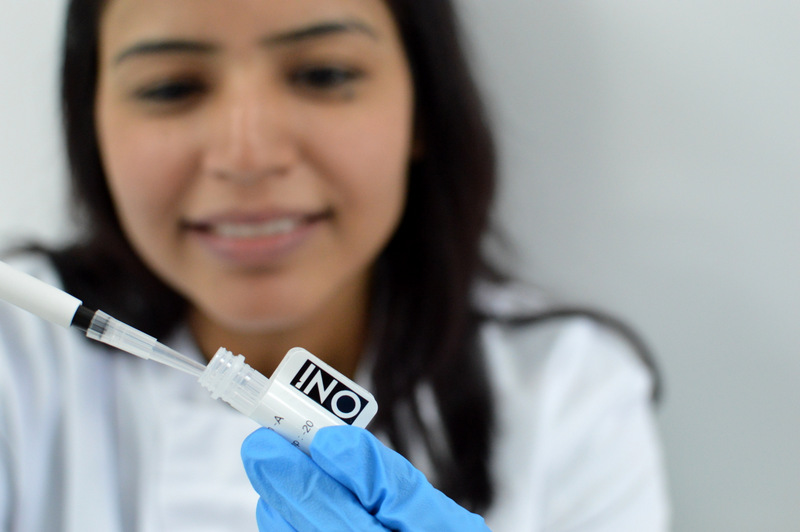